Online learning platform for traditional Indian dance
Bharatanatyam
Sign Up and get 25% OFF
Teachers required at Kaladiksha!! - Enroll Now 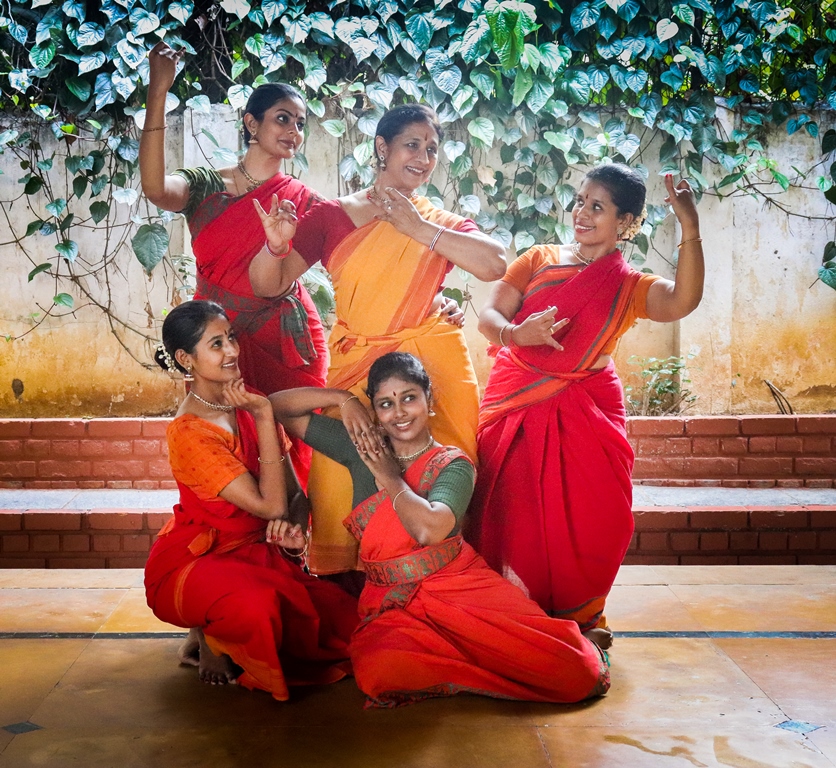 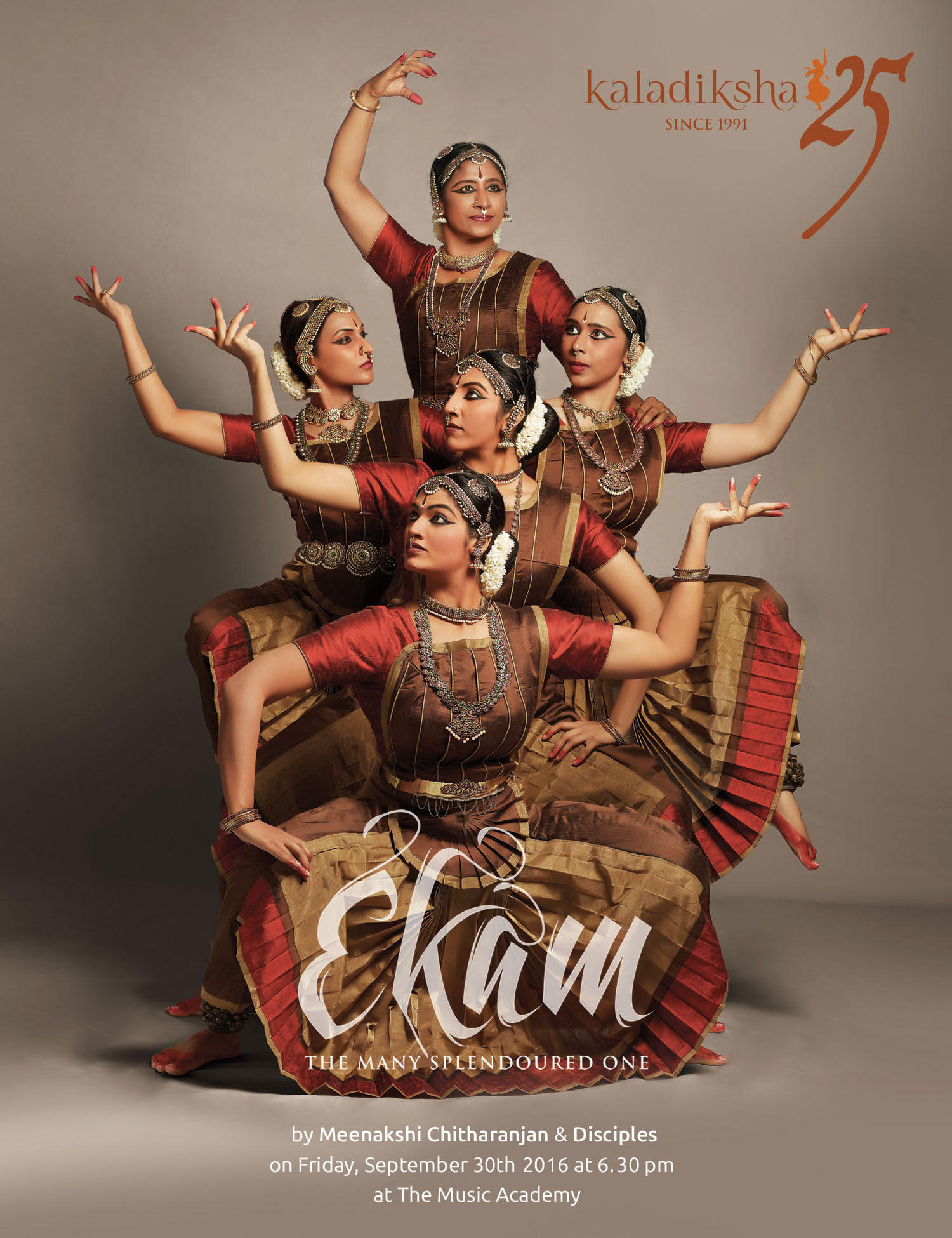 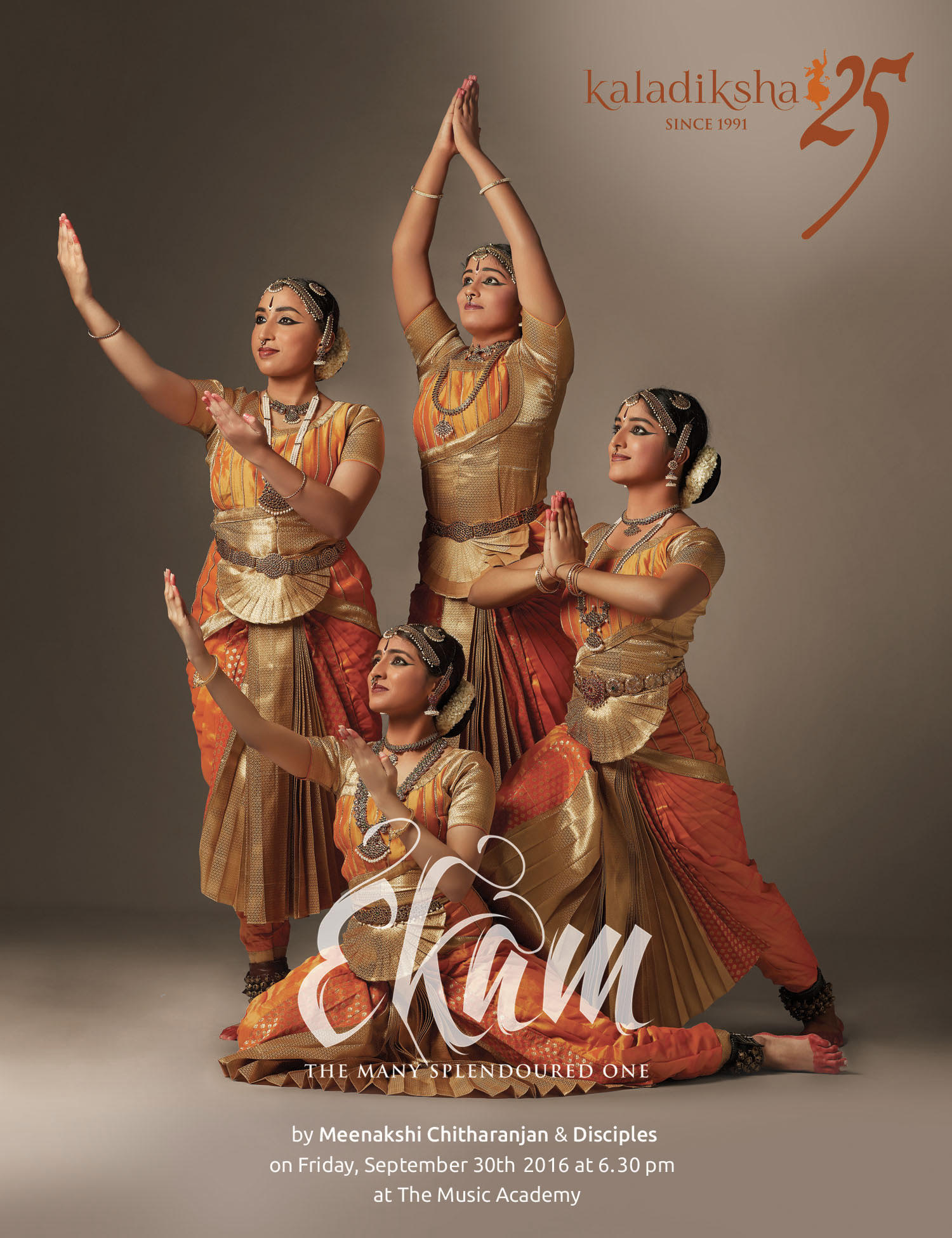 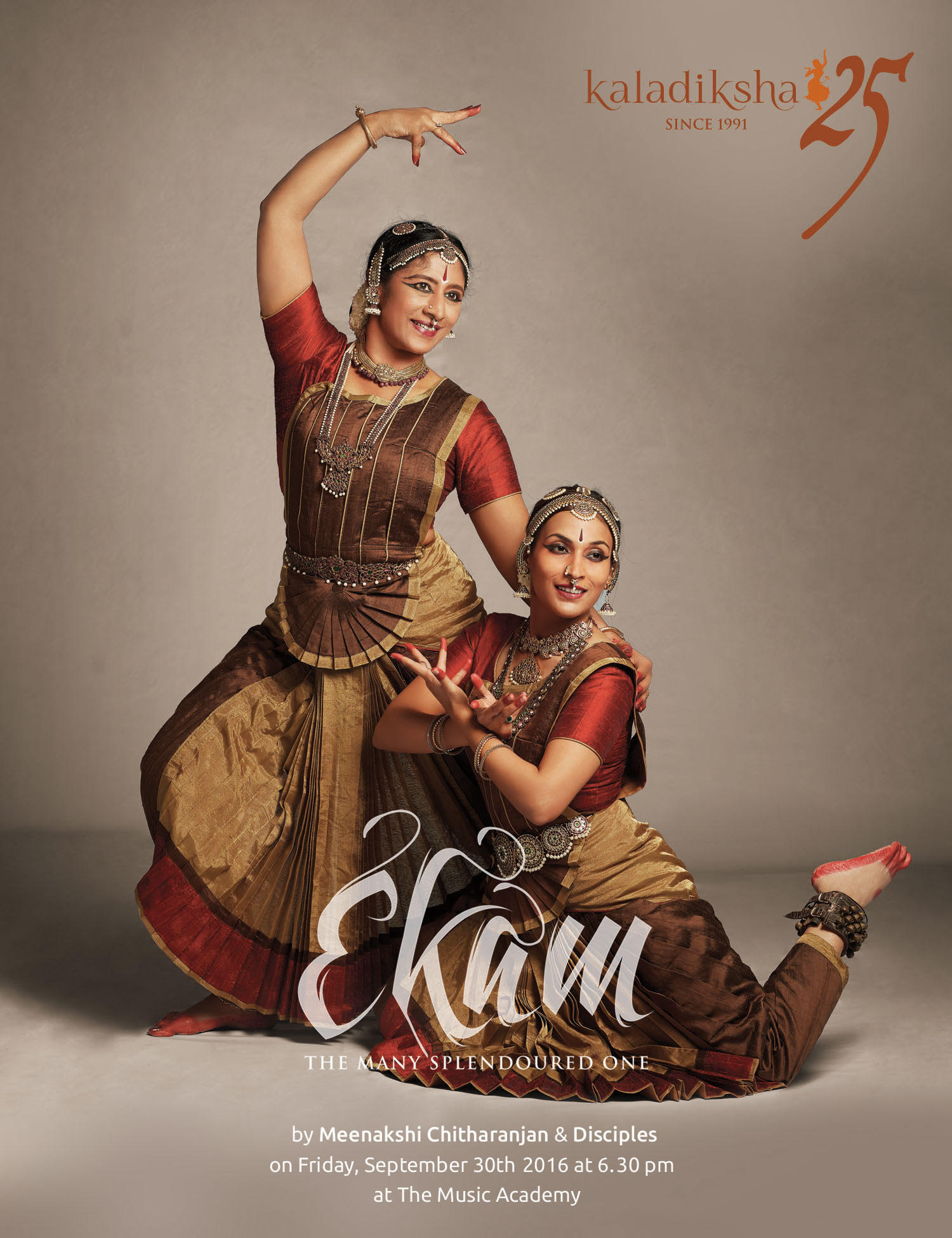 Ekam is the term used to represent ‘The Supreme Oneness’. This concept was propounded and established by Adi Sankara. Though he did so, he also realized that common people cannot identify and understand such deep philosophy and therefore recommended Bhakti as a means of conditioning one’s mind and focusing on one’s personal God. He identified 6 principle deities of the Hindu pantheon – Ganapathyam (Ganesha), Kaumaram (Kumara), Sauram (Surya), Shaktham (Shakthi), Shaivam (Shiva) and Vaishnavam (Vishnu). These 6 major streams of Hindu worship are referred to as Shanmatham.
However, on a higher level of consciousness, Adi Sankara believed that Brahman is the one and only reality and everything else is mere appearance or illusion (Maya). There is no duality, there is no form. There is only consciousness. Based on these thoughts, Ekam was conceptualised.
On the occasion of Kaladiksha’s 25th anniversary celebrations, I needed a theme that would give opportunity for a large number of students to perform. The Shanmatham philosophy gave scope for different batches of students in different age groups to present 6 items in praise of each of the Gods. So, in Ekam, starting with Adi Sankara’s establishment of ‘Shanmtham’ culminates in his non-duality philosophy of ‘Advaitam’. 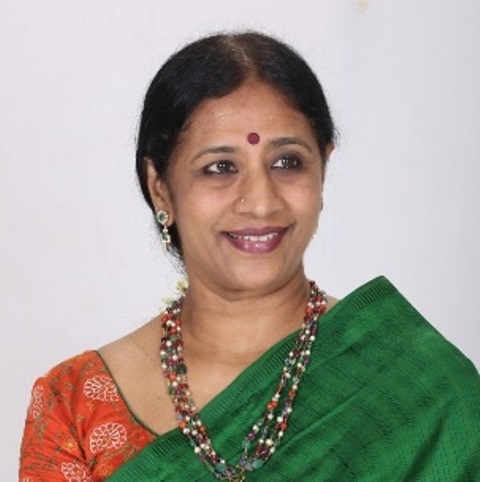 Meenakshi an acclaimed performer and teacher of Bharatanatyam , the classical dance tradition of Tamilnadu - South India .
One representation of this tradition is the Pandanallur style which is characterized by purity of line and form , grace and aesthetics, refined and subtle expressive elements 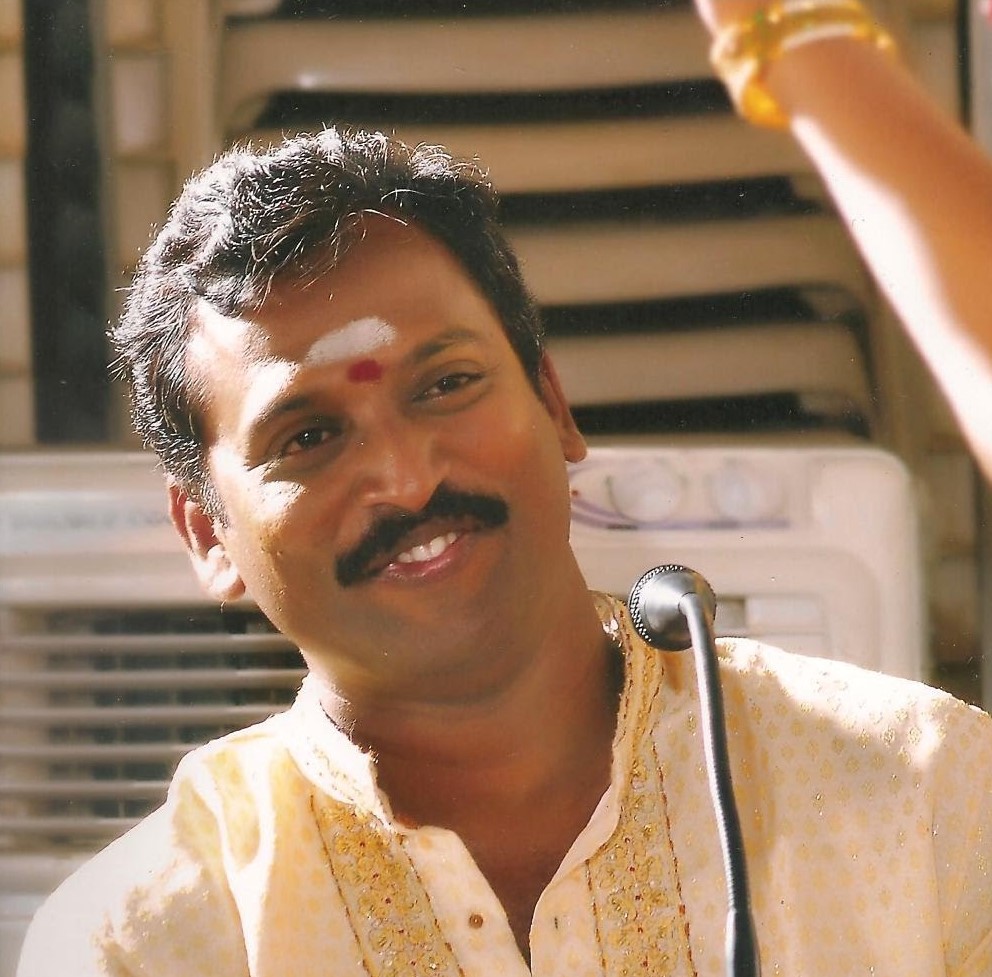 He has been teaching at Kaladiksha for the past 20 years and
has recognized for his efforts by achieving the Krishna Gana Sabha Award – Best Nattuvanaar and Music Academy  - Best Guru in 2001. 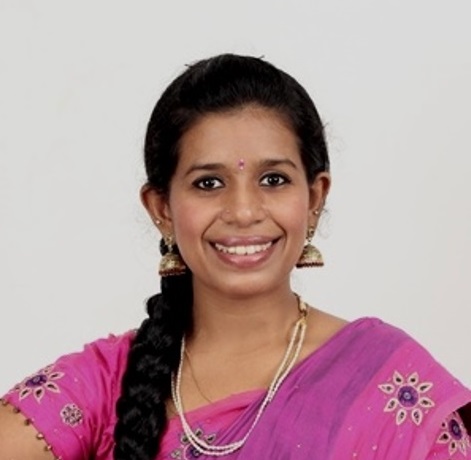 Aishwarya started her dance career at the age of 10 at Kaladiksha under guru, Padmashri Smt. Meenakshi Chitharanjan. She has done various solo performances during the music season which include Brahma Gana Sabha - Music and Dance Festival, Ilamaiyil Thiramai Dance Series and has been a part of group performances as well.

Aishwarya has a keen interest to teach this art form and is faculty member at “Kaladiksha” since 2011. 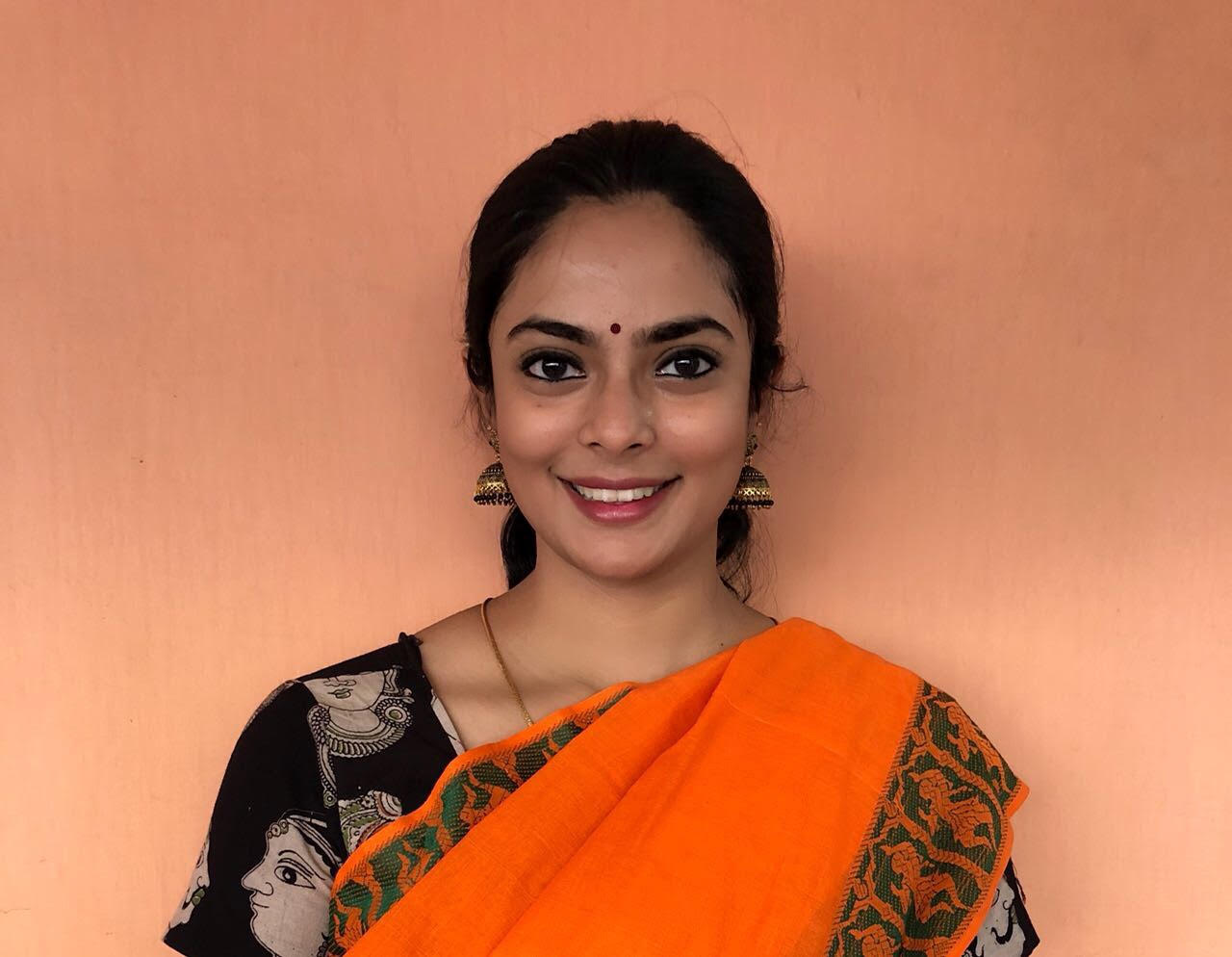 Indhuja Ananth has been a student of Bharatanatyam for the past 18yrs she started learning under Smt. Anitha Guha and at present is a student of Padmashri Smt Meenakshi Chitharanjan.

She has done several notable performances which include Bharatham festival,
Kumbakonam Natyanjali and Naadaneerajanam in Tirupati.

Indhuja has been
passionate about teaching this art form and has joined as a faculty member at Kaladiksha where she trains numerous students.

In 1991 Meenakshi established her dance academy KALADIKSHA  with the sole purpose of training and transferring this rich tradition to numerous students , thereby preserving this unique art form . In the last 25 years over 750 students have trained at Kaladiksha and 75 students have become active performers.


Today the school is recognized as a premier institution in the field of Bharatanatyam . It is empanelled with the Government of India and the Indian Council for Cultural Relations whereby many exchange foreign students avail government scholarships and train at Kaladiksha 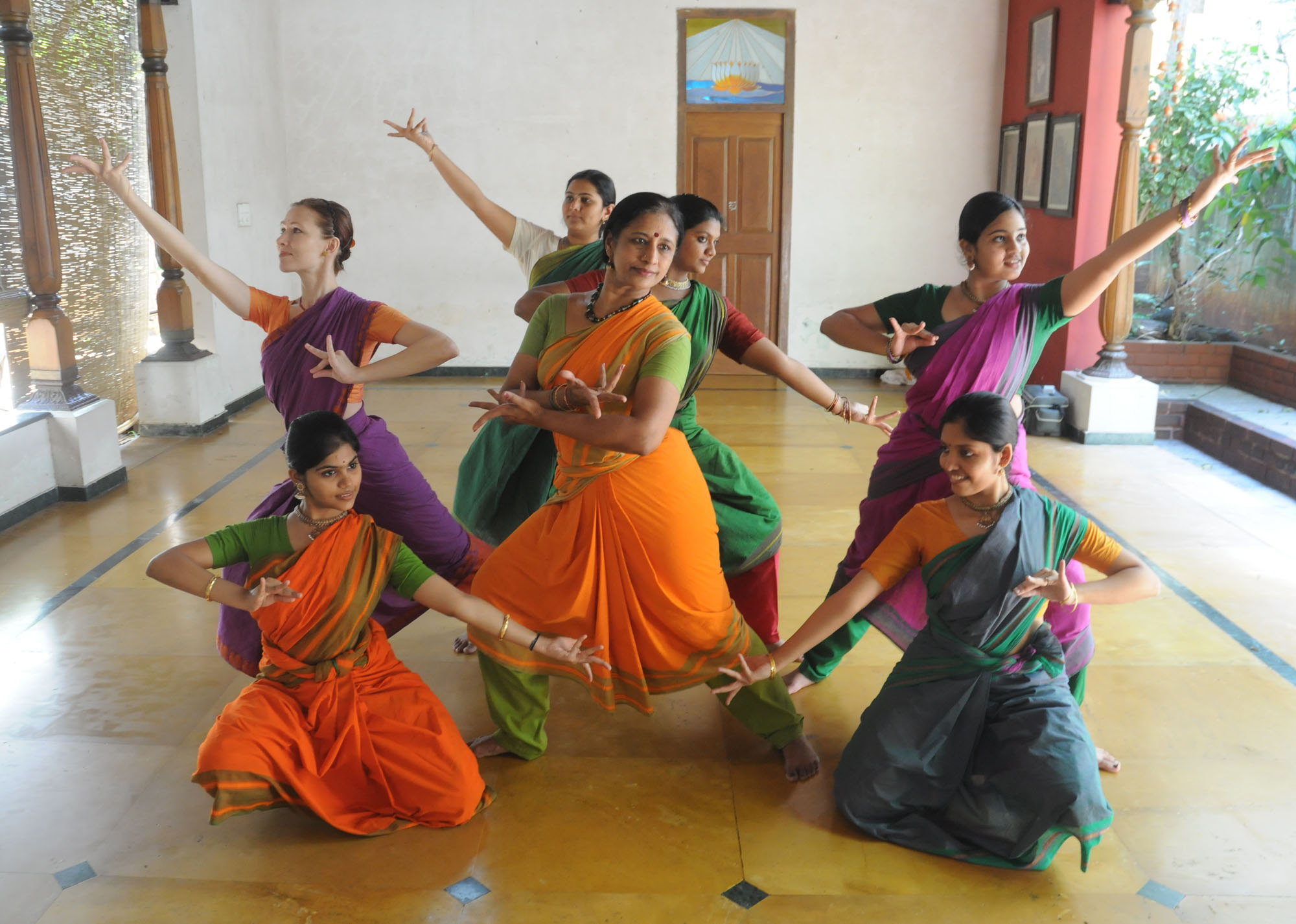 "After several years of irregular and un-structured
practice of Bharatnatyam, I stumbled upon a performance by the students of Kaladiksha. I enrolled immediately and one and half years later, I believe I have finally found a structured and disciplined program that has helped me continuously learn and progress in building my own repertoire. Kaladiksha's dedicated teachers and Padmashri Meenakshi Chitharanjan's personal attention have ensured that I steadily improve at every aspect of the Pandanallur style of Bharatnatyam which in its every movement demands grace and fluidity. Kaladiksha lays emphasis on providing plenty of opportunities for its students to perform on stage, to build theoretical knowledge of the form thereby enabling me and other students to become better performers. What truly makes every class a joy is knowing that at the end of it, I am one step closer at being a better dancer." 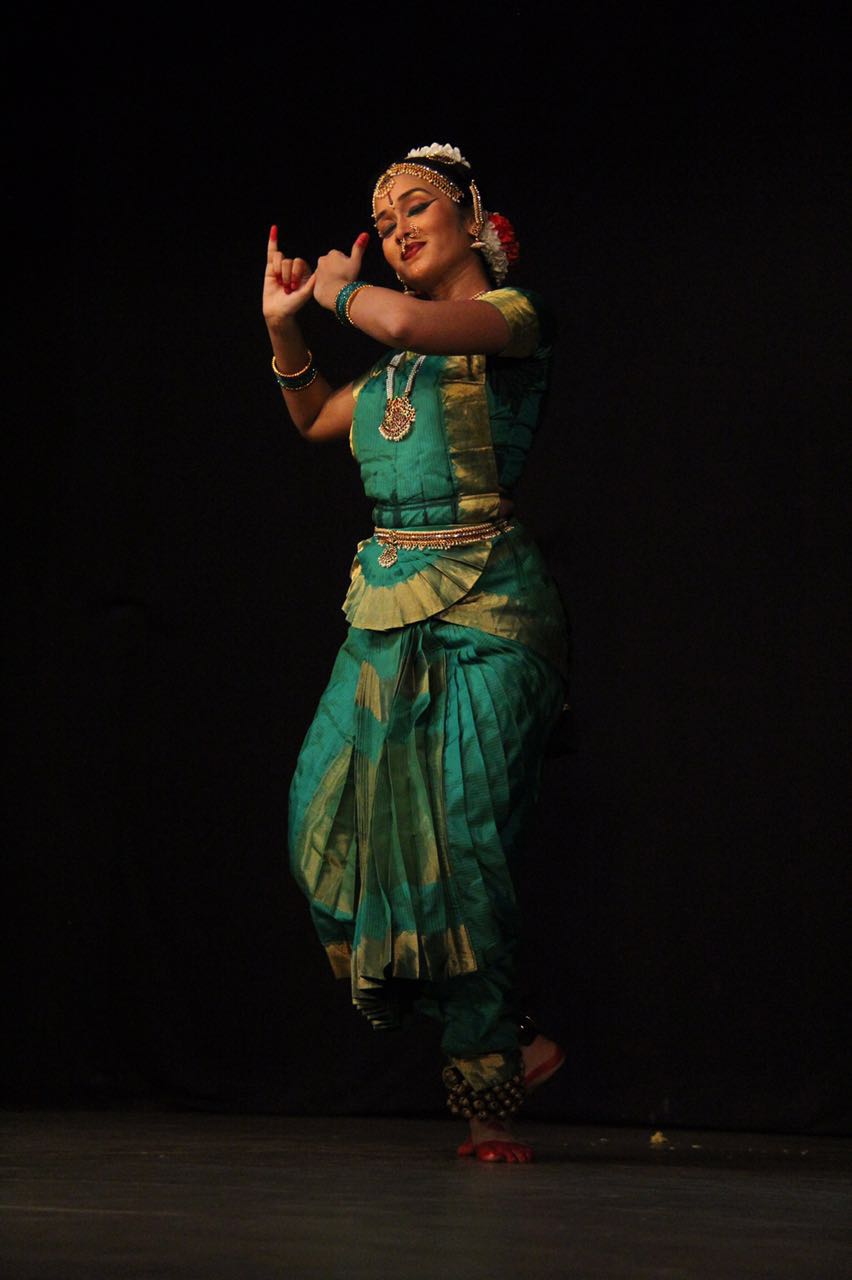 "It amazes me to think that 10 years have already passed since I began learning at Kaladiksha. From the moment I walked into the studio surrounded by lush nature and heard the nattuvangam, I felt the simultaneous serenity and power that I associate with dance exuding from the very environment. The collective ensemble of students and teachers reflected this integration with nature, as I grew to develop a close relationship with my Gurus that became an innate part of my experience as a dancer. However, the time I was living in India amounts to barely 2 years. I have truly been fortunate as I was able to visit Chennai during my summers throughout middle and high school, absorbing as much as Meenakshi Aunty and Pandian Sir determined would be appropriate for maximal improvement and growth for me. Moreover, meeting with my guru outside of India a few times further solidified my learning from the summers. Dance is an art form that I treasure, and I attribute my connection to it to the constant support of all my Gurus." 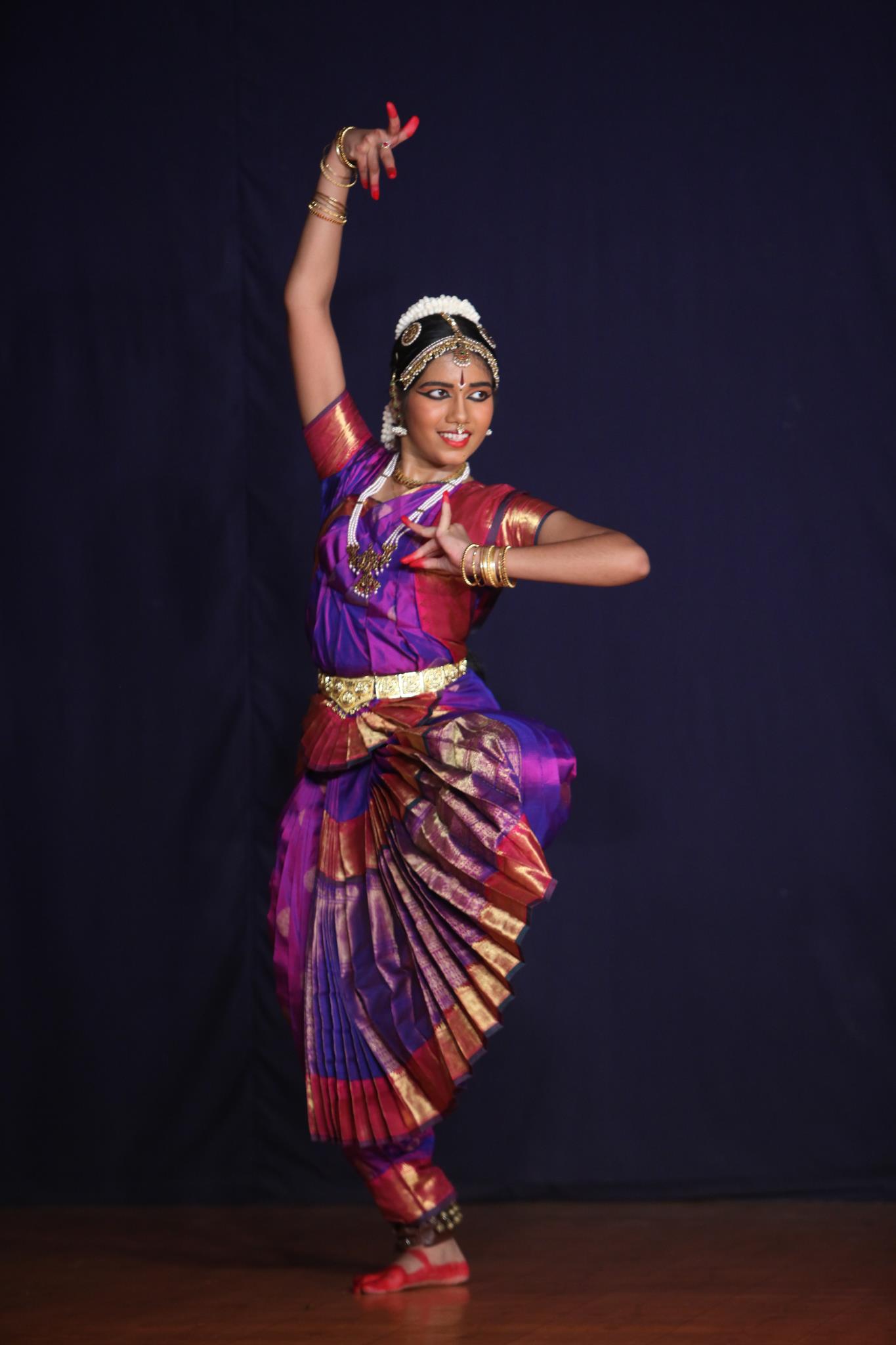 For me and many of my colleagues , Meenakshi aunty has been a great guru and has assumed the role of our parents at many times. It is a big privilege to be associated with Kaladiskha for the past 20 years of my life.
Kaladiksha has enriched my love and passion for Bharatanatyam. The institution has also groomed my personality and has contributed to my self confidence , team work , creativity and perseverance which has helped me significantly in academic and professional front.

Beyond teaching , our Guru has always encouraged our originality and valued our inputs. This has helped us develop creativity and better understanding of the art. I always felt the spiritual connection while dancing to her choreographies and feel the dance as an offering to God.  It is soulful to experience such good qualitative art form and divinity all at once. On Kaladiksha entering the 25th  year , I would like to thank Meenakshi aunty for being such a wonderful guru and for her service to this art form."

"“Kalasikaha my second home ! Apart from getting the best training of the Pandanallur style of Bharatanatyam Kaladiksha has made me a better and  happier person. Kaladiksha has taught me to love dance and dance for the sheer joy of dancing!!! Kaladiksha played a very big role in my spiritual base, insight into the scriptures in Hinduism and my all round personality development.
I am extremely happy that Kaladiksha is opening its doors to the entire world and urge everyone to give it a try!" 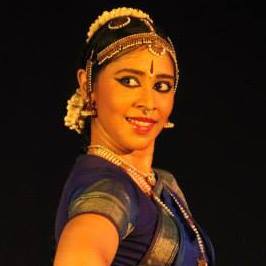 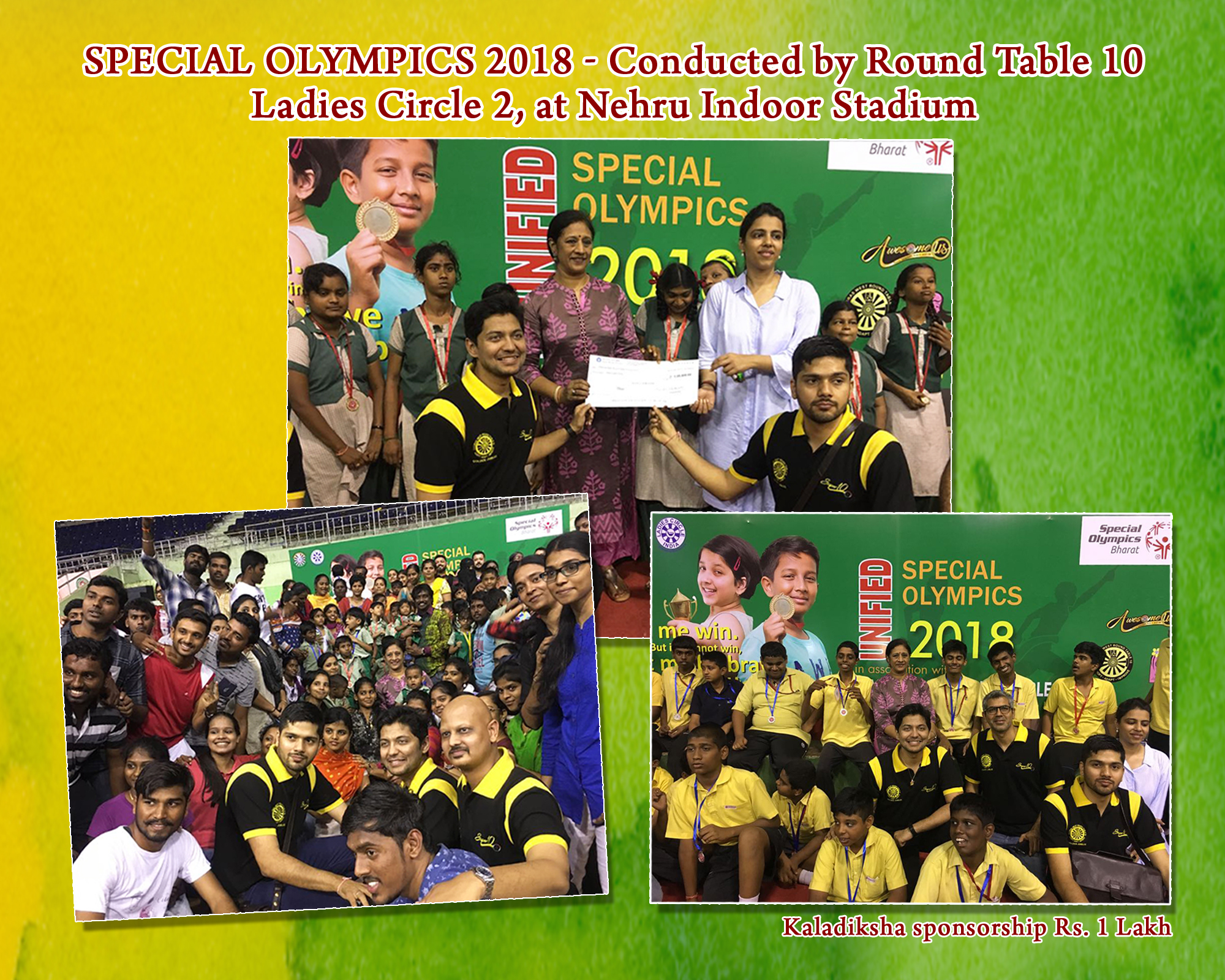 KALADIKSHA’s  contribution to a social cause. Presentation of Rs.1 Lakh to Round Table 10 for conducting Special Olympics for differently abled children at Nehru Indoor Stadium on 17th March 2018.